London Bridge has been placed on lockdown amid reports of three men carrying knives attacking people and up to 20 have reportedly been struck by a van.

Armed police are at the scene in what is being described as a “major incident”, possibly a terrorist attack.

Witnesses described a white van mounting the curb and hitting as many as up to 20 people on the bridge.

The incident happened at 10.30pm on Saturday.

A cab  driver on the bridge has reported he saw a stabbing man.

Members of the public have been warned to stay away from the area, and London Bridge station, a busy interchange connecting the Tube and rail networks, has been closed.

So far there has been no official statement from the Metropolitan Police other than a Twitter message posted at 10.28pm which stated: “We are dealing with an incident on #LondonBridge, when we have more information we will update this twitter feed”.

However several eyewitness accounts have emerged which suggest there have been multiple casualties, with bodies strewn across the pavement.

Twitter uses have also reported a stabbing and shots being fired in the area, though too this remain unconfirmed.

It is not yet clear whether the government’s COBRA crisis command team has been informed of the alleged attack.

Scotland Yard said officers were at the scene and they would update with further information.

According to eye witnesses several people are receiving emergency treatment after being stabbed.

There have also been reports of shots being heard.

We are aware of reports on social media. We will release facts when we can – our info must be accurate #LondonBridge

One woman told the Sun: “We had to run there was loads of shooting”.

According to one report 15-20 people were injured after the car ploughed into them.

There were also reports that somebody had run into a restaurant and stabbed two people.

Holly Jones, a BBC reporter who was on London Bridge at the time of the incident, said she had seen a man in handcuffs being taken away from the scene.

She said a white transit van had knocked several pedestrians over, estimating five or six casualties injured or seriously injured.

“A white van driver came speeding – probably about 50mph – veered of the road into the crowds of people who were walking along the pavement,” she told BBC News.

I’d say there are about four severely injured people. They all have paramedics assisting them at the moment.”

Chris Wimpress, who works for the BBC, described the aftermath as “pandemonium”.

He went to the bridge after being told of an unfolding incident.

“I was told there was something major happening,” he said. “As I walked down Southwark Street heading east, I started to see dozens of people running away, clearly distraught. Mostly young people, many of them in tears.

“It appears a van came down from the city into the London Bridge area.”

He added that witnesses had told him there was a stabbing in the Southwark Tavern, while others heard at least 12 gunshots in the area.

Two people, he said, had told him there were “men dressed in black”

Our reporter Eleanor Steafel is in Southwark Street where people have been told by police to run.

People in the area are are hysterical, she reports, with one girl on the phone screaming, “It’s happening!”

Armed police are walking horses of people away from the area and a lot buildings between the Globe and the bridge seem to be in the process of being evacuated.

Telegraph reporter Patrick Sawer spoke to bar manager Taylan Bonadie who told how he suddenly saw dozens of people fleeing away from London Bridge past his pub, the Trinity, in Borough High St.

He said: “People looked scared. They were running and police were telling everyone to leave. Somebody said there was another incident in Borough Market.

“We locked the doors to keep the customers safe until police advised them to leave and make their way home.”

One drinker, Emma, who had been in a pub close to a London Bridge with friends, said they had been forced to abandon their night out as police cleared the area.

“We were having a drink when suddenly I saw people outside running and the next thing police told us to leave the area quickly. It was terrifying,” she said.

Police have been entering bars and restaurants in the area and telling customers to get down on the floor amid reports that the incident is still ongoing.

London Bridge is closed both ways Transport for London (TfL) said, warning the public to avoid the area.

Trains are currently not stopping at London Bridge or Borough stations.

Scotland Yard said officers were at the scene and it would update with further information.

Latest pictures from the scene

Police told everyone in Southwark Street to “run”, our reporter at scene

Eleanor Steafel says: “I’m in Southwark Street where everyone has just been told by police to run. People are hysterical. One girl is on the phone screaming “it’s happening!”.”

Police have been entering bars and restaurants in the area and telling customers to get down on the floor amid reports that the incident is still ongoing.

There are now reports of” five or six shots” fired or  explosions of some kind from witnesses on Southwark Street, about 300 yards from the Shard.

“The sense I’m getting is that this is not a situation that is over,” LBC’s reporter on ground has said. “This is still an incident that is very much ongoing”.

As well as #LondonBridge officers have also responsed to an incident in #BoroughMarket. We have armed police at the scenes.

Police are reportedly dealing with a second incident at Borough Market half a mile away.

Armed police are evacuating people within a mile radius of the scene, buildings including the  Globe and the are being evacuated.

Holly Jones, a BBC reporter saw a van swerve into a crowd.

“A white van driver came speeding – probably about 50mph – veered of the road into the crowds of people who were walking along the pavement,” she told BBC News. 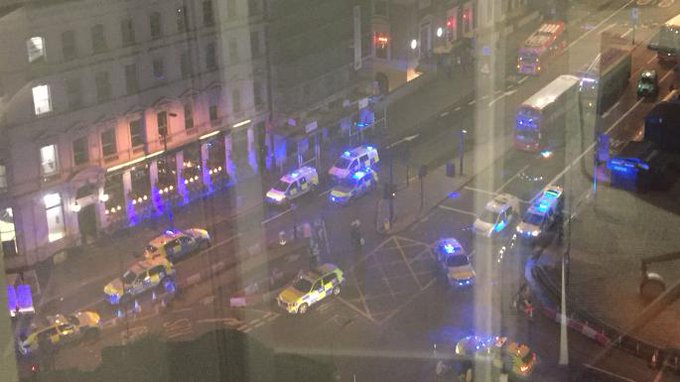 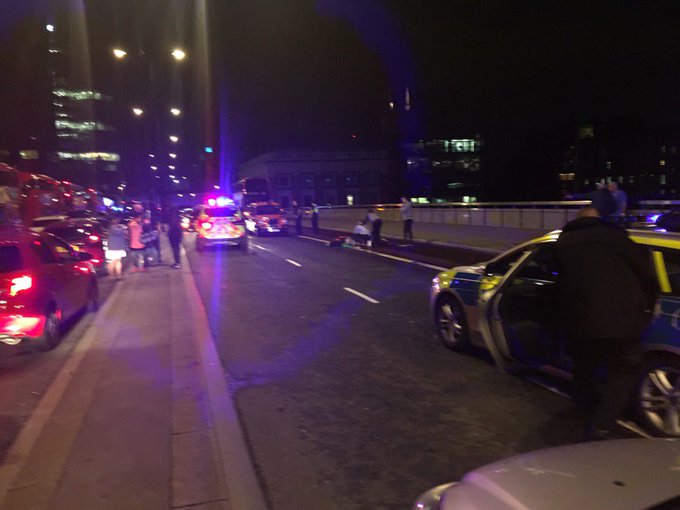 “I’d say there are about four severely injured people. They all have paramedics assisting them at the moment.”

Witness first thought somebody lying on the ground was drunk

Nick Archer was swiftly on the scene.

“We had been drinking and came out the  on to the road and looked and looked to my left and there as a guy, I thought he was just drinking but he was lying on the floor,” he told Sky News

“And then a couple of seconds later, about three police vans flew past.The guys who were with the guy on the floor flagged the car down.”

The bomb squad has arrived on the scene, while several people thought to be suffering from knife wounds are being given CPR by ambulance staff.

One woman said: “We were in London Bridge station. An announcement came on which said that due to an emergency the station was closing and to leave via the nearest exit.

“We left the station and crossed the road. There were lots of blue lights to our left on the bridge and to our right.  “We crossed over to tooley street and then saw crowds of people running which created a sense of panic.

“We ended up walking towards the river with a crowd of people. A few people jumped the fence.

“We got to the river and walked down to Hayes galleria. There were helicopters and police boats on the river. We went into cote.

“There was a woman and her husband crying. They said a van had mowed people down on London Bridge and were stabbing and shooting people. They were both very upset.”

Report Bank Station has been closed

There are reports that Bank station, just a few hundred yards north across the Thames from London Bridge, has also been closed.

“Police got out of BMW 4×4 , they were carrying machine guns”

Will Heaven, the  managing editor of the Spectator was in a cab on London Bridge minutes after the incident began.

“I saw there was somebody on the ground with a small crowd around them. It looked as if somebody had collapsed.

“Then there was another person, not on the pavement but on the ground. Then the penny dropped that something had happened,” he said.

“Police got out of a BMW 4×4, they were carrying a machine guns,” he added. “I saw one person getting into an ambulance, they were clearly in a bad way, they were being comforted by first responders.

“There was tremendous gunfire”

Tony Murphy, a former serviceman, heard the incident unfold from his nearby flat on Upper Thames Street. “There was tremendous gunfire. At first I thought it was fireworks, then I recognised it was significant gunfire”